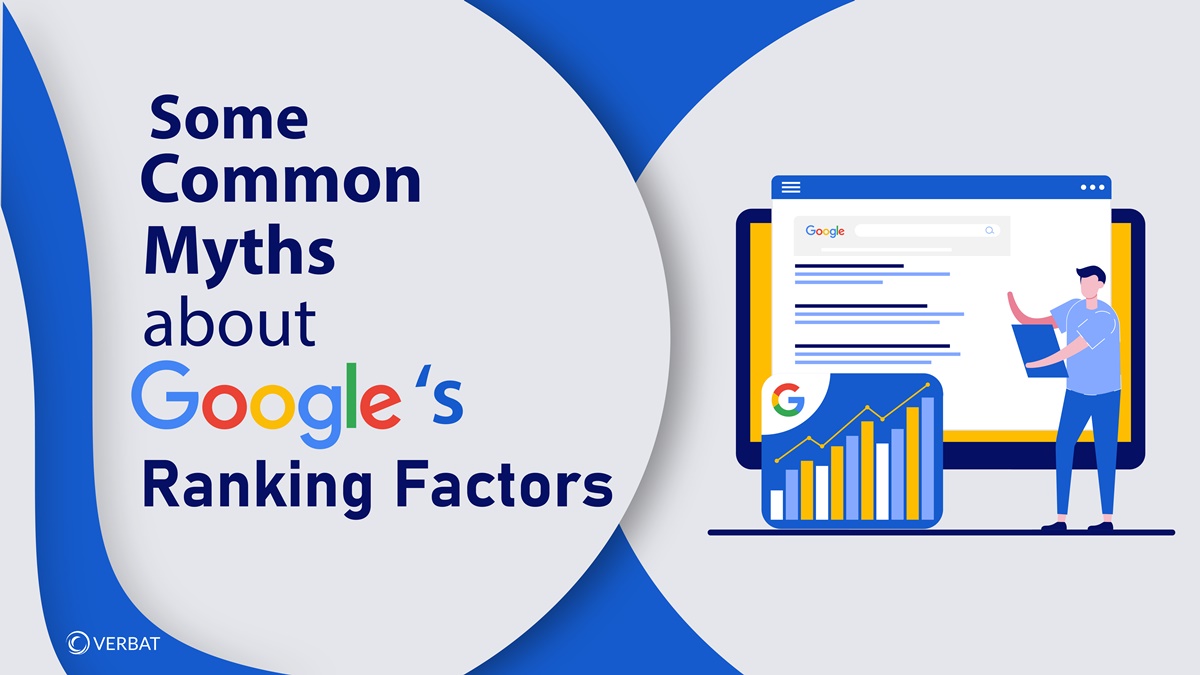 With a zillion amount of information and millions of websites available on the web, Google algorithms sort through them to find the most relevant, helpful results in split seconds and present them in an order of relevance for the user. To present the most relevant results search algorithms look into many factors such as words used for query, relevance and usability of pages, the expertise of sources, location, and settings. As there is much ambiguity over what exactly is counted as ranking factors, there are many misconceptions associated with it. Here we examine some common myths about Google’s Ranking Factors brought up by many SEO professionals or clients.

This has been coming up as a ranking factor in lists every now and then, although Google denied that it is not. Agreed, that these are inter-related, but inter-relation does not equate to causation.

Domains that have been functioning for years would have acquired these ranking factors over the years. It is highly likely that they have content and links and more customer support that they have accrued over time. But the truth is that it is the other signals that come with age- but are non-essential to have.

The same applies to domain registration length. A domain is something you buy and hence it is absurd to make it a ranking factor. The timeline of your domain registration is of little relevance to the user as it has nothing to do with their query. But it does loosely matter in determining authority.

Google does own a patent on using registration length, but this does not necessarily imply that they are using it for ranking purposes.

Pogo Sticking might be used for internal testing, contrasting ranking charges against each other, quality control, and other factors but not as a ranking factor in the core algorithm.

This is a case of misunderstanding of some Google comments by some folks in the SEO community. Google has already made it clear that it does not treat unlinked mentions as links.

What went on here is that unlinked mentions are employed for building knowledge graphs and determining entities, but not factored in for ranking. Does the knowledge graph have any bearing on ranking? Probably yes, in many subtle ways, but we should enumerate them as a factor, instead of the constituents that may partially make them up.

Accelerated Mobile Pages or AMP are lightweight pages build to offer mobile users a lightning-fast, more engaging experience. Although closely related to page speed, only page speed is considered a ranking factor, albeit a small one. This is because Google weighs relevancy when compared to page speed.

This is one of the most prominent misinformation trending in SEO now and then. This essentially means that the person behind it has little understanding of LSI at all. LSI (Latent Semantic Indexing) are abstractly connected terms that search engines apply to deeply understand the content on a webpage.

But, according to Google’s John Mueller, “there’s no such thing as LSI keywords — anyone who’s telling you otherwise is mistaken, sorry.”

XML sitemaps have is unrelated to ranking. They are an approach used by Google to discover your pages- but if Google has indexed all of your pages, adding an XML sitemap will be of little use although there is no harm in adding one.

Not all websites need an XML sitemap. It is a sort of a band-aid for sites that face crawl issues. But there are a lot of non-ranking benefits for having one such as including additional data available in Search Console.

At the moment, accessibility is not considered as a ranking factor although several things that are essential for your website to be accessible such as alt attributes, proper heading usage, etc. This does not imply that your page shouldn’t be accessible. We hope search engines will eventually turn their attention towards accessibility- but we haven’t reached there yet.

The web is not always right. Although Google and other search engines want to display accurate content, that is a hard problem to solve. The emphasis is on the consensus of the web rather than being accurate. Also, the search engine is putting in an effort to match the query intent and use backlinks to gauge authority. The focus is on showing whether the site is authoritative or reputable. In reality, search engines are not measuring the ‘correctness of the content but the popularity of it.

As early as 2010, Google had made it clear that it doesn’t use social signals. They can’t because most social networks prevent them from crawling. Also, if they were using it and any of the social media sites suddenly blocked them by putting up robots.txt. This might bring drastic changes to Google’s ranking.

But they do crawl social media sites from time to time, but they treat these pages just as any other page.

Google algorithms have evolved so much that it has better ways of determining whether a subdomain is being used as a separate site or as a part of the main site. As regards subdomains VS. directories, it very much on how you use them and how they interlink them to everything else, and not the actual domain or directory itself.

There are plenty of studies saying that relocating from one to the other resulted in a dip. But, in all of those studies, many forget to mention that they didn’t just move- they changed the navigation, UX, and linking structure.

Deleting a ton of links to subpages and replacing them with one link to a subdirectory will have an impact on your SEO. But that is due to links and Page Rank and not the actual URL structure.

Hopefully, this clears up a lot of confusion around the above-listed factors. Most of the lists that talk about Google ranking factors are never-ending and lists everything under the sun. Hence it is very important to focus on the factors that matter such as the relevance of web pages, quality of the content used, and usability of web pages. If you are looking for a digital marketing support team to maximize your SEO efforts Contact Us

Written by Shibu Kumar
Shibu's expertise in Digital Technologies and his business forward approach has helped Verbat's customers derive significant results on Digital channels over the years. He is currently responsible for Global Marketing, Sales Support and Alliances. Shibu’s strong technology background coupled with his passion for B2B marketing places him in a great position to execute strategies in building brand awareness and market share for Verbat.
« Previous post
Pursuing Traceability in the Food Supply Ecosystem Using Blockchain
Next post »
Blockchain in Financial Services.