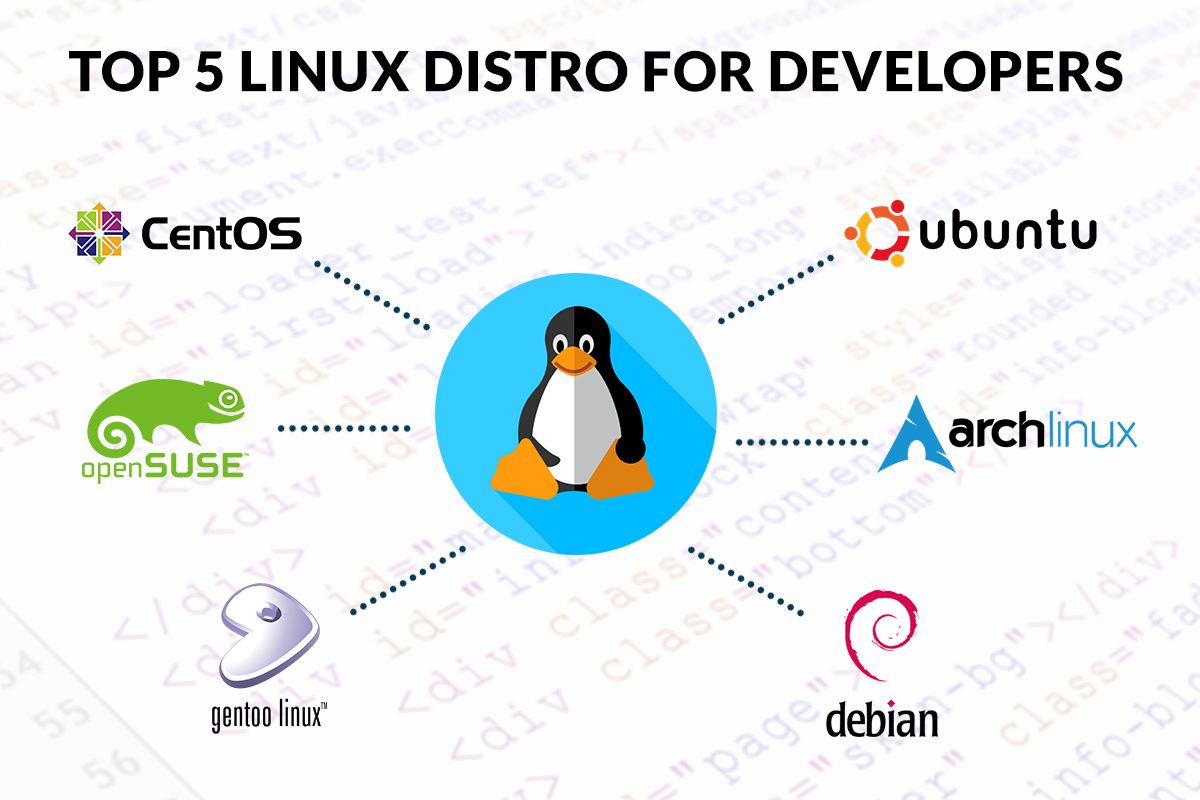 Generally, distributions are built to serve a specific series of concerns. Like the versions of Linux that were to be installed on servers with heavy traffic expectations like web servers.

There are several distributions of Linux developed to be used in networks that emphasize security, where critical information should be accessed only by a select few.

As a matter of fact, Linux is at the core of several advanced Firewalls.

Linux also shows up on many embedded devices, like routers, switches, smartphones, GPS systems, among others.

Why developers should prefer Linux over Windows?

Linux comes with inbuilt compilers or interpreters, so there is no need for any additional downloading. Windows do not have any pre-installed compilers.

Moreover, if Linux does not have what you need at the moment, you can enter a command and it will automatically download the required package and install it.

Linux contains an array of low-level tools like sed, grep, awk piping, etc. most apt for developers and great for programmers who want to build command-line tools.

Linux is a programmer’s haven because of the versatility, power, security, and speed it offers. Also, it has a built-in package manager.

The vibrant open source community is another attractive feature for Linux.

Here are the top six Linux Distros for Developers.

The majority of commercial RHEL software applications run smoothly on CentOS with the use of YUM package management. CentOS also flaunts an impressive repository of software, along with Red Hat Software Collections (RHSCL) for dynamic languages and open source databases. Moreover, it provides an ideal environment for programmers interested in enterprise development and programming in general.

CentOS is also one of the finest free Linux distributions for servers, making it an ideal platform for web development and testing.

Ubuntu is one of the best-known Linux distributions. It is popular with all kinds of users irrespective of their expertise, from beginners to seasoned professionals. Ubuntu LTS (Long Term Support) provides additional stability for developers and programmers.

This would explain the popularity of such platforms for newbie Linux users. It is also especially useful for programmers, as Snap packages provide a simpler method to repackage and distribute new software, while also offering a large repository of software aptly suited for the developers use.

Ubuntu’s boasts of a highly vibrant community forum which can be used for any possible support issues. User experience can be customized with the different derivates of Ubuntu like Lubuntu and Xubuntu, making it the perfect contender to be the best Linux distro for programming.

Debian distro is made up of an array of software packages with their own set of executables, scripts, documentation, and configuration information. It also incorporates a maintainer, with the sole responsibility of keeping the package updated, tracking bug reports, and staying connected to the upstream author of the software.

The large user base and the diligent bug tracking system works to find issues and fix them swiftly.

The advantage offered by Debian i.e. that the installations can be easily configured to serve multiple functions including a bare-boned firewall, desktop scientific workstations to the state-of-the-art network servers.

A hallmark feature of Debian as its package management system which offers the administrator of the Debian system absolute control over the packages installed on the system. It also comes with the option to install a single package or automatically update the operating system. Individual packages may be protected from automatic updation.

Gentoo is another major Linux distribution. For years, Gentoo has attracted a good amount of reputation by maintaining more packages and supporting more platforms than Debian.

The most distinctive feature of Gentoo is its source-based nature. This means that rather than installing pre-compiled binaries from a core server, each package to be installed should be built each time using a C compiler.

Although this could wind up as a laborious process, this also gives the user the flexibility to look into what is needed and what is not. In essence, it allows the user to build the ultimate customized environment.

Another implication of the source-based nature of the distribution i.e. build-time dependencies is automatically installed while building packages that are specifically requested for install.

Another attribute that particularly appeals to developers is that cross-compilation is made easy for developers. It easy as installing any other package, with the help of cross-development tools.

These tools not only allow to build full working toolchains for multiple platforms by issuing a few commands. Moreover, the updates to these packages are also part of the regular package updates which you wouldn’t dare to play with if you have successfully built your own toolchain manually.

OpenSUSE is an open-source Linux distribution developed and maintained by the openSUSE Project. It comprises of both a KDE, GNOME desktop, and an inherent package management system known as Yast.

Another hallmark feature of Open SUSE i.e. the end-user to submit a root password for almost every single task. Hardly anything happens within the operating system without the explicit permission of the end-user.

In addition to that OpenSUSE offers the end-users the option to select the packages that need to be included in the customized version of OpenSUSE.

Arch Linux is an x86-64 general-purpose Linux distribution that follows a rolling release-model. This means that it aims to provide the latest stable versions of majority of softwares. The default version is a minimal base system, customized by the user by adding the purposely required components.

Arch Linux centers on the principles of Simplicity, Modernity, Pragmatism and User centrality.

Linux distros provide an array of tools and consistent support for programmers and developers and hence an exciting environment for programming. The choices are aplenty despite the level of expertise. It would be advisable for a beginner to install Ubuntu or Debian, whereas advanced users would perhaps prefer Arch or Gentoo.

Written by Prashant Thomas
Fiscally conscious & goal driven professional with over 15 years of strategic IT experience in multiple disciplines. He has completed his Engineering & M.S. in the US and followed it up with very strong IT leadership experience with top companies. He has a rich cross functional experience in translating business needs into technology requirements, defining, developing roadmaps, rolling out IT solutions across the segments of enterprise. He is a certified Scrum Master and a TOGAF Certified Enterprise Architect.
« Previous post
An Introduction to Azure HDInsight
Next post »
Retention Marketing: More Relevant Now Than Ever